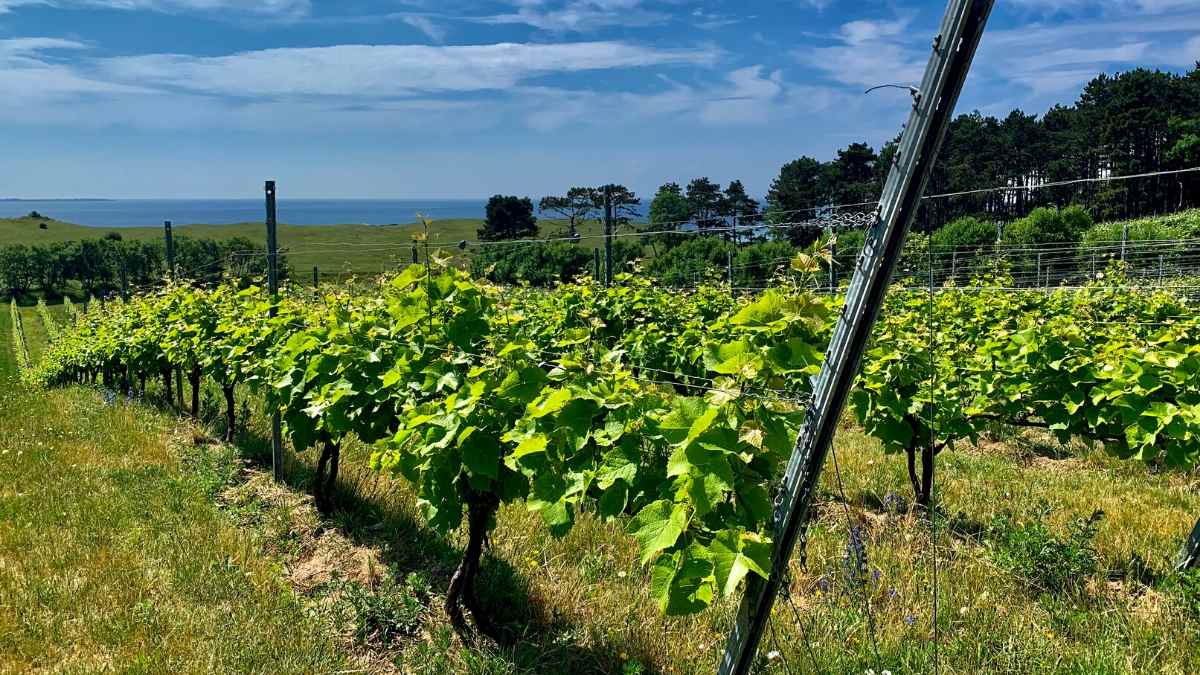 We love wine. We love it at home and when we travel – vineyards, wine tours and tastings are often a part of our itineraries. I’ve seen it called wine tourism and if we use term, you can call us wine tourists. That’s why we were so excited to learn of a Denmark winery close to our Copenhagen home. It didn’t take us long to plan a visit and experience Danish wine.

Contents hide
1 How is There a Winery in Denmark?
2 Where Are The Danish Wineries?
3 How Do You Get From Copenhagen to the Røsnæs Peninsula Vineyards?
3.1 1. Driving To Denmark's Wineries
3.2 2. Taking Public Transit To Denmark's Wineries
3.3 3. Taking a Train And Bike To Denmark's Wineries
4 How to Spend The Day At Dyrehøj Vingaard, The Largest Winery in Denmark
4.1 Do a Vineyard Tour
4.2 Enjoy a Wine Tasting
4.3 Stay For Lunch or Dinner
5 Where to Stay Overnight On Røsnæs Peninsula
6 Now You Know All About The Danish Wine Region
7 Lets Keep in Touch
7.1 Get New Posts and More Straight to Your Inbox With the Robe Trotting Newsletter

How is There a Winery in Denmark?

Yeah, we were pleasantly surprised to learn about Danish wine too, but when we looked into it, things made sense. Because of global warming, wine regions around the globe have shifted north. We’re all going to die, but at least we can visit a Denmark winery now.

The warmer average temperatures combined with advances in horticulture and growing technology have made the Danish wine region possible. There are few locations in Denmark where cold-weather grapes thrive. In each of these zones a micro-climate exists and the vineyards receive an average of 100 extra days of sunlight each year. Where Are The Danish Wineries?

You can find vineyards on the east coast of Jutland (the mainland of Denmark), the island of Samsø and in two areas of Zealand (the island on which Copenhagen is located). The wine region of Denmark forms an arc from north of Aarhus in Jutland to the west coast of Zealand.

The largest wine producing vineyards are on the peninsula of Røsnæs in Western Zealand. It’s a picturesque coastline along Kalundborg Fjord lined with fields of grain and poppy flowers. That’s where we decided to begin exploring Danish wine – at the largest of the vineyards in Denmark, Dyrehøj Vingaard.

The property at Dyrehøj was purchased in 2007 with no intention of producing wine. A chance comment from a neighbor put the whole project in motion. He told the new owner, “that land you bought is the best place in Denmark for making wine.” There was already one small vineyard nearby, but no large-scale wine producer.

With its southern-facing hills, extra sunlight and well-suited soil, the chance winery in Denmark became a success. It may have seemed crazy to produce wine in the Nordics, but not anymore and the cold-weather wineries of Denmark are growing each year.

How Do You Get From Copenhagen to the Røsnæs Peninsula Vineyards?

At the time of publishing, there are four vineyards on the peninsula. We spent most of our time at Dyrehøj which is the largest, but they’re all within 15 kilometres of each other.

The directions listed below will get you to Dyrehøj and you can bus or bike between them all quite easily.

Reaching Røsnæs peninsula from Copenhagen is very easy and takes an hour and a half to two hours. The drive is about 90 minutes straight across the island of Zealand. We love how when you leave Copenhagen you very quickly go from city to countryside. The journey to Røsnæs and the Denmark wineries is delightful and the landscape is stunning. HERE is a link to the Google Map driving directions.

Need to hire a car for your trip to the wineries of Denmark? Click HERE to research car rental rates.

It’s just as simple to take public transit to the wineries on Røsnæs peninsula. You can take the train from Copenhagen Central Station to Kalundborg Station. It’s the end of the line, so you can’t miss your stop but you need to check the train schedule to ensure you aren’t waiting at the station.

Once you arrive at Kalundborg you can take the 553 bus to Ulstrup Vænge, it should be waiting at the bus stop adjacent to the train station. Copenhagen public transportation is top-notch, so you might as well take advantage of it. HERE is a link to the Google Map transit directions. 3. Taking a Train And Bike To Denmark's Wineries

We planned on visiting the vineyard entirely by public transit, but opted to combine the train and our bikes to reach the winery. One of our friends that joined us is Dutch, so of course he wanted to bike, and it was a great way to get there. The online directions said the route was “mostly flat” but there were definitely some hills on the bike route. Still, it was perfect to ride along the coastline and the fields of Røsnæs peninsula.

The bike ride is 27 minutes, but if you ride along the coast it adds about 10 minutes. It’s incredibly worth it and the views of the fjord are stunning, add another 10 minutes to the journey because you’ll stop for photos along the way. Use #RobeTrotting in your instagram posts so we can share them.

HERE is a link to the Google Map bike directions from Kalundborg Station.

How to Spend The Day At Dyrehøj Vingaard, The Largest Winery in Denmark

The jewel of the Røsnæs wineries is Dyrejøj. They have a sprawling property which includes a meeting and conference facility, tasting cellar, wine bar, tapas restaurant and large courtyard. It can be rented for events but there’s always something going on at Dyrejøj. Here’s an idea of what to expect and what you should do when you visit the largest winery in Denmark.

Do a Vineyard Tour Before our trip to the peninsula, we arranged a tour and tasting through Dyrehøj Vingaard’s website. Tours are conducted daily in Danish and also available in English and German. For international visitors, you must email to arrange a time for the tour in your language.

Tours can be arranged for one or two hours with about half of the tour being spend exploring the grape fields on the property. During our excursion we were amazed by the views of the fjord along the vineyard stroll. The southward-sloping hills shined in the sun and are ideal for the cold-climate solaris grapes which were developed in Freiburg. We learned about the history of the wine producers of Denmark from Betina, a member of the family that owns the vineyard. After showing us the fields, she led us to the gin and whiskey distillery on-site at Dyrehøj. When the grape harvest is complete and the wine is produced and stored for sale, the vineyard switches gears and makes gin. We enjoyed checking out the gin lab and wrapped up the tour in the storage area and learned about the intricate process of storing and ageing the wines at Dyrehøj.

After walking the fields, the distillery and barrelling area, we finished at the wine bar. There, Betina poured us a glass of sparkling wine and handed things off to her colleague who led us in an informative tasting. We learned more about the types of wine produced at the vineyard. They specialize in white wines and rosé because the grapes are hearty enough for the Nordic climate.

The process of wine making in Denmark is unique. Because it’s so new, the wine production requires innovation. Unlike other European wine regions, the Danish wineries have a limited history to draw from – so each season of wine production is an exercise in innovation.

If you’re unfamiliar with the weather in Denmark – it’s unpredictable. A cooler than average spring or an extra sunny September can mean drastically different acidity in the grape harvest. When you don’t have generations of records to work from – things get interesting. Dyrehøj overcomes these difficulties to produce delicious tasting wines. They achieve consistency across each bottle of their Rös label product by balancing the cold climate wines with sugar to achieve sweetness with acidicty for a complex taste, structure and high acetone.

Stay For Lunch or Dinner

We had four tasting glasses of wine and after drinking some wine on the train ride to the vineyard (normal thing to do, right?) and biking in the sun, we needed some food. First we made a few purchases, a bottle of our favorite white wine and a bottle of gin. Wineries always have the best souvenirs! We walked across the courtyard to try out Cafe Dryehøj, the on-site restaurant. They’re open daily and serve a variety of small plate tapas meals. We each sampled four menu items and were impressed with the cuisine. The food was simple, deliciously prepared and fresh. Each paired well with a bottle of our favorite Solaris Sauvignon Blanc that we had recently discovered across the courtyard.

Where to Stay Overnight On Røsnæs Peninsula

If you want to make the most of your visit to Røsnæs, stay for a night or two. That way you can visit Denmark winery and spend more time on the peninsula. We opted to go back to Copenhagen in the same day, but we made sure to visit Strandhotel Røsnæs before we headed home. During our wine tasting we met the owner, Carl, who was at Dyrehøj’s wine bar during our tasting. We were introduced and he invited us to come by for a glass of wine and a swim. Carl owns one of the other wineries on the peninsula and we were lucky to meet him at Dyrehøj. It’s great to see how much each Denmark winery supports the others.

Stopping at the hotel was the perfect way to end the day. We cooled off in the fjord and relaxed on the terrace of the Strandhotel Røsnæs.

When we return to the area, and we already plan to for the wine harvest in October, we will definitely extend our time and spend the night.

Now You Know All About The Danish Wine Region

We’ve always enjoyed wine tourism and have been lucky to visit wine destinations like Colmar and Strasbourg in France. It was exciting to have a similar experience so close to our home in Copenhagen.

Denmark’s history is one of a society that adapts to geography, climate and landscape to thrive. It’s no wonder the country is emerging as an unlikely wine-producing destination.

You have all the information you need to discover this incredible part of Denmark for yourself. Plan a vineyard tour, wine tasting, delicious meal and stay over with a view of the fjord to visit each beautiful winery.